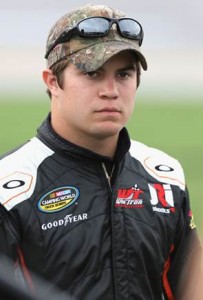 MOORESVILLE, North Carolina (March 3, 2014) – – Sunoco Rookie of the Year contender Mason Mingus didn’t get the start he wanted in the NASCAR Camping World Truck Series season-opener at Daytona (Fla.) International Speedway on February 21, but a vicious Lap 73 incident has the Win-Tron Racing driver counting more than just his blessings.Teams went through a massive facelift during the off-season, with the newly redesigned truck bodies matching the look of their respective showroom counterparts. The adjustments, however, also came with a tweak in the rules package with a focal point on safety.It’s because of that target that the Brentwood, Tennessee native walked away from a brutal and nearly head-on collision, as if nothing ever occurred.“I am really disappointed with the outcome of our Daytona run, but I am extremely thankful to the work that NASCAR and Toyota have put into developing such a safe truck. The wreck was the hardest crash of my entire racing career and it completely destroyed our brand new truck, but all the safety components worked magnificently and it’s because of that, I’ll be able to race in Martinsville next month.“Even though I wasn’t feeling sore or anything after the wreck, I thought for sure the next day would be rough as far as my body was concerned, but I woke up feeling the same I did the morning of the race. That says a lot to not only NASCAR, but the track and of course, the SAFER barrier walls for doing its job. I really expected to have a headache too, but I was running at 100 percent on Saturday and haven’t slowed down since.“I feel without Dan Griswold and his staff at NASCAR initiative to keep the truck(s) as safe as possible, not to mention my Simpson Racing belts and Butler seat – things could have turned out a lot different.”Though Mingus, 19, walked away from the “big one” at Daytona without injury or much less a side-effect, the Win-Tron Racing development driver has taken an active role to making sure that safety remains a number one priority in his first full season of NCWTS racing.“We’re going to go from one of the biggest tracks on the circuit to one of the smallest places in Martinsville next month and believe me, everyone at Win-Tron Racing is making sure that our new Toyota Tundra’s are fit all the way around,” Mingus explained. “I’ve watched races there in the past and I know you can hit pretty hard there too. I want to be around from start to finish this season and I realize if we have the safest trucks possible, I can concentrate my sole effort on putting our No. 35 Toyota Tundra up front.”“Safety is our number priority one next to winning at Win-Tron Racing,” said crew chief Mark Rette. “We take great pride in knowing that our trucks meet the standards of NASCAR, but our own safety checklist on a week-in and week-out basis. It’s disappointing that our truck is junk, but it’s a credit to everyone on our team, plus Toyota and NASCAR for making sure that these trucks are as safe as possible and Mason will be ready to go for Martinsville. We’ll have something to prove there, guaranteed.”Follow Win-Tron Racing on Twitter @WinTronRacing.Mingus tweets too. Follow him on Twitter @Mason_Mingus.About Win-Tron Racing:Located in Mooresville, North Carolina, Win-Tron Racing (Win-TronRacing.com / @WinTronRacing) is the home of one the most potent ARCA Racing Series presented by Menards single-car operations. Owned by former racers Kevin Cywinski and Nate Thiesse, the team since has acquired the assets of County Joe Racing, becoming a favorable fixture on the circuit. Since Win-Tron Racing’s inception in 2007, the team has hosted a variety of drivers including leading drivers James Buescher, Blake Bjorklund, Justin Marks, Matt Merrell and Brandon McReynolds to their first career ARCA victories. In 2014, the team will begin its eighth year of competition with a full-time presence in the ARCA Racing Series presented by Menards and the NASCAR Camping World Truck Series.