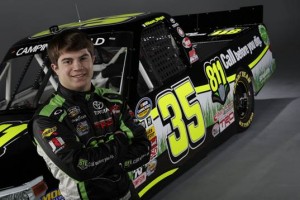 Mingus, driver of the No. 35 Call 811 Before You Dig Toyota Tundra, is anxious for his arrival at the 0.526-mile paved oval for a number of reasons, but most importantly, the race presents an ample opportunity to put himself and his Mooresville, North Carolina-based Win-Tron Racing team back on track.

In the season-opening NCWTS race at Daytona (Fla.) International Speedway last month, Mingus and his team had a strong run violently halted after being involved in a Lap 73 incident, while running in the top-10. While disappointed with a 28th-place finish, the team led by veteran crew chief Mark Rette, was encouraged by the performance.

To enhance their chances for a noteworthy performance this weekend at Martinsville, the team recently partook in a private test session, where Mingus was able to spend several hours learning the tight paperclip-like short track, but also continue to learn the characteristics of a NASCAR Camping World Truck Series vehicle, as he prepares to make just his fifth career start on March 29.

“I’m really looking forward to Martinsville, as it has been near the top of my list of tracks I have wanted to race at for years and now I can’t wait for the chance to actually make that happen,” said 19-year old Mingus. “I gained a lot of confidence during the test and we made a lot of changes to my No. 35 Call 811 Before You Dig Toyota Tundra, so I think we have a good truck to take back there this weekend.

“Martinsville is a tough place to drive, so we’ll have to fine-tune our truck after practice on Friday. Qualifying up front will be important, as track position seems critical for success there. I’m still learning these trucks and of course, the track, but I’m hoping that my short track skills will come into play and help compensate.”

While the Brentwood, Tennessee native quickly understands the fundamentals of short track racing, the key component to survival at Martinsville is brakes and Mingus knows he’ll have to not only use patience, but brake conservation if he has any hopes of recording his first top-10 finish.

“Braking is the biggest obstacle at Martinsville and as a short track racer, I’ve always grown up being told to be easy on the brakes, especially in heavier cars like an ARCA car or a truck. But at Martinsville, you have to be very aggressive under braking, it’s such a tough race track, because we carry so much speed down the straightaway and then to almost stop in the corners, you have to keep telling yourself to conserve, conserve, conserve.

Once I had a better understanding on finding my braking points during the test, I was able to see the brake temperatures when I came off the track improve and we started working on mechanical adjustments. Without a doubt, testing will be the contributor to our (hopeful) success. We’re shooting for a top-10 finish. It will be tough, but we’re a relentless team, who wants to show that we’re going to be around contending all year.”

“After a brief break, we’re ready to get back after it this weekend in Martinsville. I’m proud of the hard work from Mason, Mark (Rette, crew chief) and the rest of the Win-Tron Racing team for getting our No. 35 Call 811 Before You Dig Toyota Tundra ready for Saturday’s race. We felt like the test was extremely productive and will be a benefit to us bringing home a positive finish.”

Win-Tron Racing will utilize chassis No. 047 this weekend at Martinsville (Va.) Speedway. It is a new truck in the fleet and the same piece that the Win-Tron Racing development driver tested with last week.

The Kroger 250 is the second of 22 races on the 2014 NASCAR Camping World Truck Series schedule. The event will be televised live on FOX Sports 1 on Saturday, March 29 beginning at 2:00 p.m. The green flag is scheduled to drop shortly after 2:30 p.m.

Learn about Call 811 Before You Dig and what it can do for you by connecting to call811.com.

Located in Mooresville, North Carolina, Win-Tron Racing (Win-TronRacing.com / @WinTronRacing) is the home of one the most potent ARCA Racing Series presented by Menards single-car operations. Owned by former racers Kevin Cywinski and Nate Thiesse, the team since has acquired the assets of County Joe Racing, becoming a favorable fixture on the circuit. Since Win-Tron Racing’s inception in 2007, the team has hosted a variety of drivers including leading drivers James Buescher, Blake Bjorklund, Justin Marks, Matt Merrell and Brandon McReynolds to their first career ARCA victories. In 2014, the team will begin its eighth year of competition with a full-time presence in the ARCA Racing Series presented by Menards and the NASCAR Camping World Truck Series.